I think it must be 6 but editorial show it 5.
Can anybody explain me why the given test case answer is 5.

Easiest solution to understand so far -

@g_himanshu0100 your logic goes O(n^2) in the worst case , while O(n) or O(n logn) is accepted , try reducing your complexity
if you have any doubts ,
click here to view my solution

A) if its the first day of curing - then simply use X to cure the country with highest population (last ekement of set), no need to update X (X remains same for the next day) and then update the coutnries population (after doubling) on which we used X cures. and we increment the tally of total days required by one.

Note : Also before doing all these tasks i also chek whether my multiset is empty or not.

I have also attached explanation with sample testases. 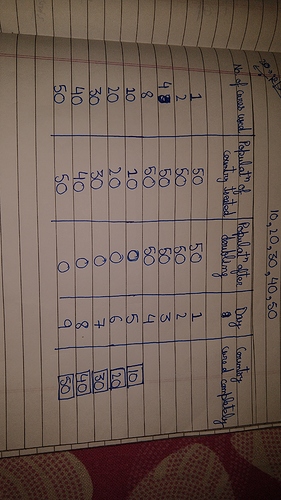 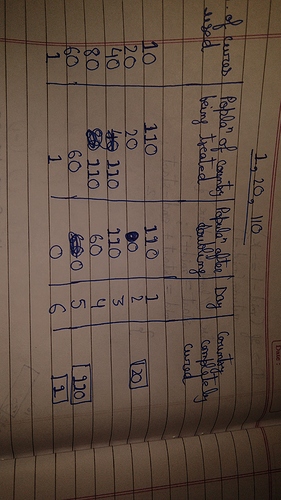 PLZ read this and help me out with my logic and piece of code .

If we do not deliver any cure on a single day, will the value of x be changed?
If yes, please describe in a brief.

Deliver Or not the value of x will be doubled until you get a equal or the consecutive smaller country let me take the example from sample
3 10
1 20 110
On first day x is 10 now if we use it at 1 our next x will be 2 so we can’t do that if we use 10 at 20 remaining infected people will be 10 and next x will be 20 and the next value will be 20 again because remaining infected people and cure gets double. So if you look closely I will give u a scenario in case of 20 last time we took two days to eliminate but what if we don’t use the cure on first day now or 10 will increase to 20 and on second day it will cutt off the 20 once at all it took 2 days again. So, it doesn’t matter you use the x Or not the days will remain the same.
Now if you try to solve x for 110 you will also observe that the scenario will be same in that case too and in all other cases. So, if you want to use x every time it won’t be wrong

but if you don’t use x and double it every time until you find equal and a previous consecutive value the scenario will also be same.

Have a look at the this case.

If I assume x won’t be doubled if I don’t deliver any cure:
we can cure 8 people of the first country and thus x will be 16. In this process, it takes more days.

I can’t understand why we have to double the value of x after delivering 0 cures. (0*2 = 0)
The problem statement says,
Chef can supply twice the number of cures that were delivered (i.e. people that were cured) on the previous day. Chef cannot supply leftovers from the previous or any earlier day.

Definitely I’m wrong as I’m getting WA. But I want to understand.

Hope you understand after this 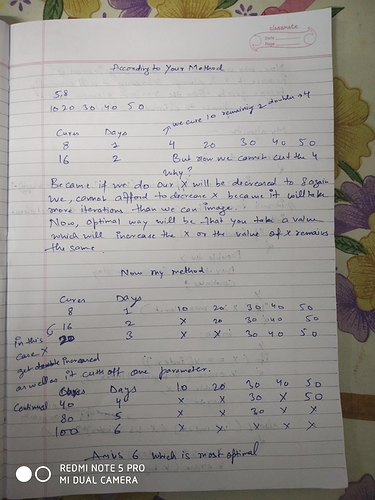 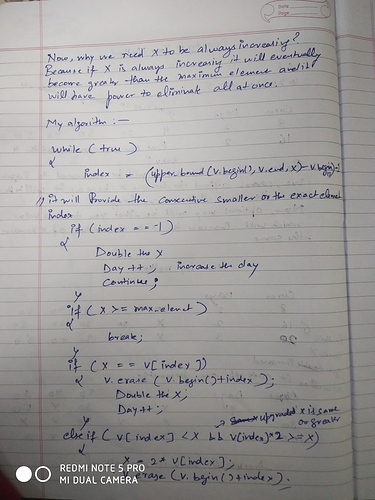 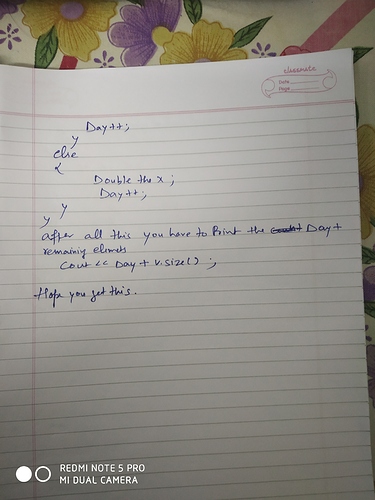 My algorithm is not looking good, the code has become too long.
however, it worked. Thanks for clarifying the problem.

You can also save log2(n) values in double and then change it to integer. i think that would solve the problem without using any while loop. precision errors arise due to float.

For example, consider the situation : 2 3 7 11 125, with x = 5, (x is the number of vaccines available at any given point in time). If we decide to send vaccines to the 1st country with 2 infected individuals, we end up with having 4 vaccines at the end of the day, which is less than x. Hence we lost one vaccine.

Selecting the 2nd country instead would’ve given us 6 vaccines at the end of the day, which is >=x. So this is a deal that’s worth taking.

If we do not have any country that satisfies the given condition, then it is best to perform the operations on the country with largest number of infected people as that will help increase the number of vaccines by a factor of 2 everyday.

Thanks for clearing this.

plz someone help me out as well to fix error in my code !
mine is 92nd comment in this forum