Given a directed graph G = (V, E), and an entry vertex r, find the number of pairs of vertices (x, y) such that there exist paths r \longmapsto x and r \longmapsto y having no common vertex other than r.

If two vertices x and y have a common dominator other than r, then this dominator will be present in all paths from r to x and from r to y. On the other hand, if the only common dominator of x and y is r, then we can find paths r \longmapsto x and r \longmapsto y, which share no vertex other than r. Hence, if we compute the dominator tree of G using the Lengauer and Tarjan algorithm, the task reduces to find the pair of vertices in the tree, which have a common ancestor other than r, and can be done in linear time.

We are given a directed graph G = (V, E), and an entry vertex r. Now, for a given vertex x, consider all paths from r to x. Some vertices will occur in all these paths (e.g., r, x). These vertices are called the dominator of x. More formally, if a vertex d is present in all paths from r to x, then d is a dominator of x. The nodes r and x are the trivial dominators of x, other dominators of x are called non-trivial dominator.

Next, we show how to check whether for two given vertices x and y, there exist paths r \longmapsto x and r \longmapsto y having no common vertex other than r.

Now, there are two possible cases:

The sizes s_1, s_2, \cdots, s_k can be computed easily in linear time using a bottom up traversal of the tree. Hence, the only task that remains is to calculate the dominator tree of the graph.

We can group the nodes according to their farthest dominator, and these groups will represent the vertices in the subtrees rooted at v_1, v_2, \cdots, v_k, i.e., children of r in the dominator tree. Hence, we can compute the number of good pairs using the size of these groups.

Farthest Dominator in a DAG:

The computation of farthest dominator can be done easily by traversing the vertices in topological order (i.e., from root to leaves).

This will compute the farthest dominator of all nodes in O (N + E) time.

For the general graphs, we can compute all dominators of a vertex, and then pick the one which has no non-trivial dominator as its farthest dominator.

This approach will compute the dominators of all nodes in O (NE) time, and will work for the smaller subtasks.

For large graphs we can use the Lengauer and Tarjan algorithm to compute the dominator tree. This approach works in O ((N + E) \log N) time, and, can be improved to work in O (N + E) time using advanced data structures. However, in our problem the O ((N + E) \log N) will suffice.

Great problem! I was unaware of Lengauer and Tarjan algorithm but on the last day was able to finish something which turns out to be similar to it.

There was a similar problem on Codeforces, those who understand Russian might find its editorial easier to get than reading the paper mentioned above. The video editorial for CF problem is here, starting at 1:01:00

A very simple algorithm for computing the dominator tree (which I actually thought of myself some years ago when I first encountered problems involving dominator trees) is:

2.4) if x is not j’s parent then disconnect j from its current parent and make it a direct child of x

This algorithm obviously terminates at some point, since nodes only move up the tree and they can’t move beyond being a direct child of the root.

A direct implementation of this is too slow, though, and even when heavily optimized, I still got TLE on one test case (while all the others passed). The tricky part is that the tree is dynamic (nodes change their parents), so the standard LCA methods don’t work. But if you find an efficient data structure which supports the needed operations (hint: Cut a node from its parent, Link it to a different node as parent, and compute LCA between two nodes), then you’re good

(of course, such a data structure exists)

In reply to mugurelionut, I tried doing this method, but don’t believe it is correct for a DFS tree. It is because I don’t think the updates work independently of each other.
Consider the graph here: 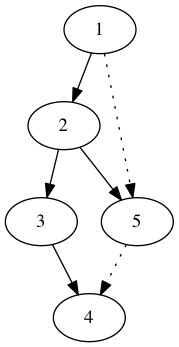 Let’s say the filled edges are the initial dfs tree, and the dashed lines are the updates. If we process 5->4 first and then 1->5, we will get the wrong dominator tree.

@tonynater: You are right about the order. However, notice that my algorithm is inside a while loop: “While there are any updates to the tree”. This means you may iterate over all the edges multiple times, until finally, in one of the iterations there are no more updates. In you example, let’s say you consider the edges in the order 5->4, 1->5. In the first iteration 4 is reattached to 2 and 5 is reattached to 1. In the 2nd iteration, the edge 5->4 will change 4’s parent again, to 1. In the 3rd iteration there are no more updates, so stop.

@tonynater: To continue my previous comment, I think there are edge orders which may force O(N) iterations of my algorithm, which would make my solution very slow. But if you sort the edges somehow (e.g. maybe edges with endpoints closer to the root first, or even shuffling them randomly), I’m pretty sure the number of iterations will be reasonably small. I’ve got no formal proof for this, though - just my intuition.