Help needed in DRCHEF (to fix the code, not logic)

ISSUE : I proposed a logic for this question which works fine on paper but i did some blunder in my code because of i m getting wrong answers. I m unable to find mistakes in my code. Kindly help !!!

A) if its the first day of curing - then simply use X to cure the country with highest population (last element of set), no need to update X (X remains same for the next day) and then update the countries population (after doubling) on which we used X cures. and we increment the tally of total days required by one.

Note : Also before doing all these tasks i also check whether my multiset is empty or not.

I have also attached explanation with sample test-cases. 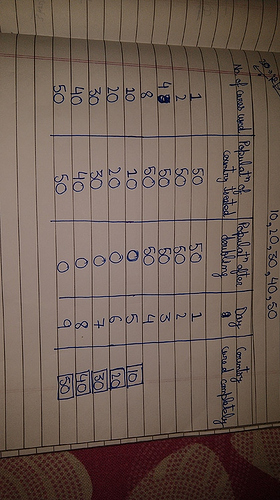 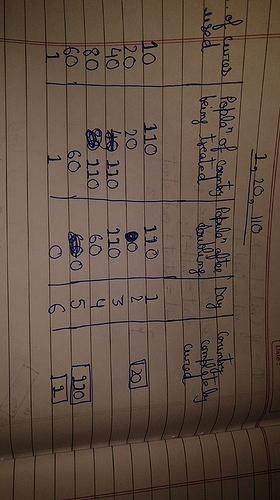 PLZ read this and help me out with my logic (which works on paper but i m failing to write as a whole code) and piece of code .

dont you think in second test case you should have cured country with population 1 first, as ability to cure is not going to go lower than X.

uhh I think no, although we have cured one country completely by using 1 cure on Day 1, but next day we can use only 2 vaccines at max, then on 3rd day 4 vaccines, then on 4th 8 vaccines and on 5th day you can use at most 16 vaccines. so we can conclude that by end of 5th day we cannot cure country with population 110.

btw i m looking to correct my code according to given logic. currently i don’t care much about my logic !