There is a rectangular piece of land, surrounded by fences.

The land can be thought of as a 2d grid which extends N units vertically and M units horizontally. It is divided into N horizontal rows, which are numbered from 1 to N, as you move from top to bottom and into M vertical columns numbered from 1 to M, from left to right.

The people want to build houses of dimensions S \times S on the remaining land.

What is the maximum number of houses of the given dimensions that could be built on the remaining land, such that no part of any house is in a river and no two houses overlap?

Let us think of a sub-problem, where we are given a rectangle of height a and width b, then how many squares of side s, we can place on the rectangle?

Since, the maximum number of squares that can fit on a side of length a are a//s, similarly b//s for the other side. 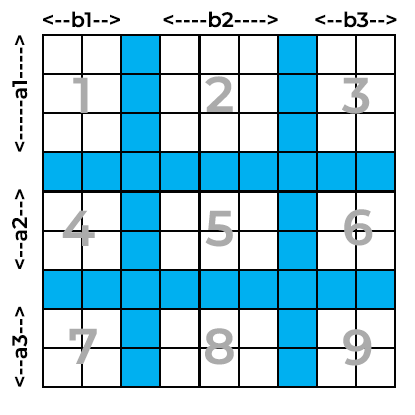 Here, the number of squares that can be placed in the first row of rectangles (i.e. on the rectangles 1,2 and 3) are -

Thus, on the i^{th} row of rectangles the number of squares that can be placed are -

So, the total number of squares that can be placed in all rows -

If m be the number of segments created by rivers along y-axis and n segments along x-axis, then this expression can be generalized for any grid.

Thus, the maximum number of squares is :

Pls review my code solution
what is wrong with it? the sample test cases give the right answer

Solution 30231347 for problem “PRACTICE/ISHVALA” - WHY IS THIS WRONG ANSWER. BELOW IS THE CODE

In my submission I’m getting runtime error even though the code is pretty much the same as that in the editorial.
https://www.codechef.com/viewsolution/35714133
Any help is appreciated.

my code is showing an error.
can anyone suggest to me how to fix it??
here’s my code for this problem
#include <bits/stdc++.h>
using namespace std;
#define l long long