For this assignment you will simulate the work of a koala rescue team. This section specifies the required functionality of the program

The koala is a marsupial and is native to Australia. Koalas typically live in open eucalyptus (gum tree) forests. Koalas live mainly in trees and eat up to 1 kg of leaves per day. Their diet is restricted to a few varieties of gum trees (e.g., Manna Gum, Swamp Gum, Blue Gum, and River Red Gum). Koalas use some other varieties of trees (e.g. Wattle) for shelter on hot days. Only one koala at a time will occupy a shelter tree. Whilst moving on the ground between trees, koalas are exposed to attacks from predators.

After bushfires in January 2020, several koala reserves were left devastated when forest habitat burnt leaving many koalas dead or injured and without sufficient food. The koala rescue team’s work is to inspect the reserves and provide help to the koalas. Unfortunately, the team operates within a restricted budget and sometimes has to make difficult decisions. The aim of the rescue team is to save as many koalas as possible within a limited budget.

The koala reserve consists of a series of observation points where the rescue team pauses, observes the koala population, the trees, and the predators, and decides how the koalas can be helped. The help may be to move a koala to a safe haven if it is injured or there is not enough food or shelter.

The Koala Rescue Team simulation begins with a welcome message and an invitation to the rescue team leader to enter his/her name. The name cannot be blank but must be less than 16 alphabetic characters. The leader is then asked to enter the budget for the rescue. This is an amount from $100 to $200, inclusive.

The program then sets up the numbers of trees, koalas and predators in each of the 10 observation points as follows:

Each tree is either used for shelter or food. Each shelter tree can hold a maximum of one koala. The food trees can produce a certain weight of leaves per day that can be eaten by the koalas (see Table 1). The weight is used to calculate the total food available for the koalas at any observation point. The food available is calculated by multiplying the number of each tree type by the weight of leaves it produces and summing these to get the total food available. Each koala, whether healthy or injured, can eat 1 kg of leaves per day 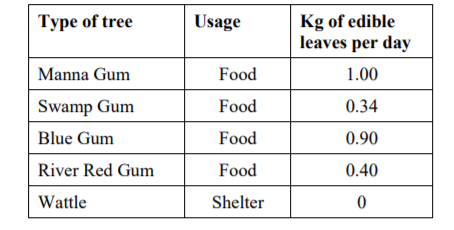 Each koala will have a randomly allocated age of 1-18 years.

The rescue team visits each of 10 observation points in turn. At each observation point the rescue team considers the number of trees, the number and condition of the koalas (some of which may be injured) and the number of predators. The team takes actions to help the koalas at each point. If the budget runs out at any point then the rescue mission continues but no actions can be taken that involve cost. The rescue mission is considered successful when all areas have been observed and all koalas have survived

At each observation point the following actions are performed

• the number of injured koalas

• the number of healthy koalas

• the weight of available food (Each koala eats 1 kg of leaves per day, whether healthy or injured).

• the number of shelter trees

• the number of predators

The following menu options are displayed:

After each action is taken the status of the observation point and available budget is redisplayed. The team can take as many actions as they decide.

a. Injured koalas not taken to the safe haven do not survive.

b. Shortage of food: Each koala in excess of the number that can be sustained by the available food supply has an 80% chance of not surviving.

c. Lack of shelter: Each koala in excess of the number that can be sheltered by the available trees has a 20% chance of not surviving.

d. Predators: If there are more than three predators then there is a 50% chance of one koala in the population being killed by a predator.

Note that the numbers of koalas must be adjusted after each assessment. For example, if there is a koala who does not survive because of the food shortage then there is one less koala to consider for the shelter. Finally, if there are more than three predators then there is a 50% chance of a koala being killed by a predator.

• koala deaths (the total of injured koalas who were not taken to the safe haven, koalas who did not survive a food shortage or lack of shelter, and koalas killed by predators, as determined from the scenarios above)

• amount remaining in the budget

Specific actions at the completion of the observations

After all the observation points have been visited then the following summary totals are displayed on the screen:

• number of trees that have been lost

. • healthy koalas (both in the reserve and safe haven)

• amount spent on the rescue

Your program must consist of at least seven classes. A suggested class design is shown in Figure 1. You may want to include comments in your program to state any assumption made.!