Bob and Alice are playing a game on a board which is a tree, T. Each node of T has some number of coins placed on it. For a node R, define \textit{game}(T, R) to be the game played on T in which players take turns to move a coin from some node other than R strictly towards R. The first player unable to make a move loses the game. For each R, find the winner of game(T,R), assuming both players play perfectly.

The game \textit{game}(T, R) is equivalent to the game of Nim, where there is a one-to-one correspondence between coins on the board and piles of stones: for a coin c, if v_c is the node containing c, then c corresponds to a Nim pile of size \textit{dist}(R,v_c). Thus, the Sprague-Grundy Theorem can be used. Some simple observations show that the exact value of c_v is not important; only its parity: we set V_{\textit{coin}} to be the set of nodes v such that c_v is odd.

Then by the Sprague-Grundy Theorem, the second player (Bob) wins \textit{game}(T, R) if and only if R.\textit{grundy}=0, so we need only calculate this value for all R.

We form a \textit{DistTracker} data structure with the following API:

In a naive implementation, at least one of these operations would be \mathcal{O}(N), but by observing how bits in the binary representation of a number change upon incrementing it and using some properties of xor, we can implement all of \textit{DistTracker}'s operations in \mathcal{O}(\log N) or better.

We then use Centroid Decomposition plus our \textit{DistTracker} to collect all contributions of v with v\in V_{\textit{coin}} and propagate them to all nodes R, thus calculating all required R.\textit{grundy}.

As mentioned, this is the game of Nim in disguise: in Nim, we start with some number M of piles, the i^\textit{th} of which contains p_i stones, and players take turns to choose a non-empty pile and take at least one stone from it, until a player cannot make a move, in which case they lose. In the game \textit{game}(T, R), let v_C be the node containing the coin C; then the correspondence between the two games is as follows:

The Sprague-Grundy Theorem proves several interesting statements but the one we’re interested in is the remarkable (and very unintuitive!) result that in the game of Nim, the second player wins if and only if the Grundy Number for the game is 0, where the grundy number is the xor-sum of all the pile sizes i.e. p_1 \oplus p_2 \oplus \dots \oplus p_M. Applying this to our game, we see that Bob wins if and only if the grundy number R.\textit{grundy} for the game \textit{game}(T, R) defined by:

We can simplify this a little: consider two coins C_A and C_B, both on the same node v. Their contribution to R.\textit{grundy} is \textit{dist}(R, v) \oplus \textit{dist}(R, v). But x \oplus x = 0 for all x, so we can remove both coins without affecting R.\textit{grundy}. For each v, we can safely remove pairs of coins from v until either 0 or 1 remain, depending on whether c_v was originally odd or even. We say that a node v \textit{hasCoin} if c_v is odd, and set V_\textit{coin}= the set of all such v. We can now rephrase the formula for R.\textit{grundy}:

Recalling the definitions of contribution and propagation from the Quick Explanation, we see that to solve the problem, we merely need to ensure that for each v \in V_{\textit{coin}} and every R, v's contribution to R is propagated to R.

Let’s consider for the moment the special case where T is simply a long chain of nodes. Imagine we had a \textit{DistTracker} data structure with the below API (a naive implementation is also provided):

Imagine further that we proceed along the chain of nodes from left to right performing at each node v the following steps: 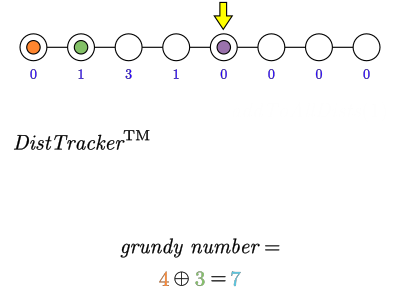 This way, we collect then propagate the contribution of each v\in V_{\textit{coin}} to all nodes to v's right.

Let’s \textit{clear}() our \textit{distTracker} and repeat the process, this time working in the opposite direction: click here to watch the example.

Now we’ve propagated the contribution of each v \in V_{\textit{coin}} to all nodes to v's right and to its left i.e. to all nodes, and so have computed all R.\textit{grundy}, as required. It turns out that Bob wins two of the games and Alice wins the rest.

The naive implementation of \textit{DistTracker} given above is too slow to be of use: we’ll fix this later but first, let’s show how we can use Centroid Decomposition with our \textit{DistTracker} to collect and propagate all v\in V_{coin}'s on an arbitrary tree T. If you’re already familiar with Centroid Decomposition, you may want to skip this part.

We now return to optimising our \textit{DistTracker}. As is often the case with problems involving xor-sums, it helps to take a bitwise approach. Let’s have a look at the binary representation of an increasing series of numbers and observe how each bit changes. The numbers along the top of the table are the bit number with bit number 0 being the least significant bit.

The pattern is clear: the x^{\text{th}} bit is 0 2^x times in a row, then 1 2^x times in a row, and continues flipping every 2^x increments. We can exploit this pattern in our \textit{DistTracker} to maintain a count of the number of tracked distances that have their x^{\text{th}} bit set: the animation below illustrates this approach with the original example. Here: 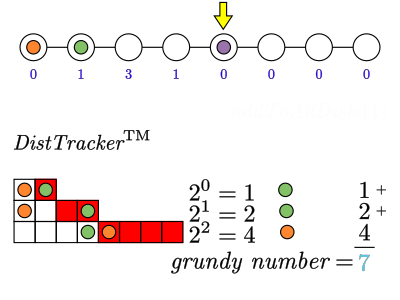 Note that the fourth row of the grid is omitted: since the graph only has 8 nodes, the max distance between two nodes is seven, and so a tracked distance can never enter the red-one-zone for a fourth row and change the grundy number. Similar logic is used to reduce \textit{m\_numBits} in the \textit{DistTracker} implementation. In general, the number of bits/ rows is \mathcal{O}(\log (\textit{max distance between nodes})). 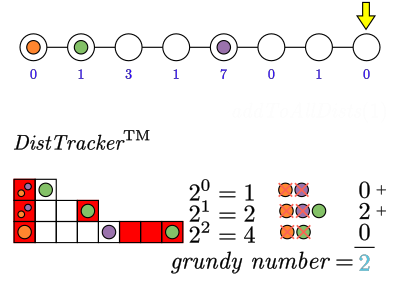 This runs quite a bit faster than my Centroid Decomposition based solution. Questions for the interested reader

The fastest solution that I saw was @sg1729’s, running in just 0.58s. See his commentary here!

All diagrams and animations were created using the wonderful manim library. High-res MP4 renders can be found here.

@ssjgz Can you paste the solution code for reference, in like ideone or pastebin and share it? As the link you said is not accessible to us

Yes, sorry - I wasn’t expecting this Editorial to be public yet, and am a bit confused as to why it is

I also didnt expect the editorials to be public so soon after the contests ends. I saw a few TODO marked, and i thought that some changes were to be made, so just informed you

@ssjgz I hope the editorial will be updated later right ?

Yep - the html versions will be updated first, though, as they actually allow me to show my images!

Wow, i had two solutions to tree problems in the contest with correct complexity, but in both i got TLE on 1/2 tests and got 15 points. Next time make subtask for n <= 50000 or set smaller time limit please…

Which of your submissions do you think should have passed?

This was the closest one: https://www.codechef.com/viewsolution/37506408

I’ve just tried this on my laptop, and it seems to give WA for subtasks 8 and 10.

I had simpler idea with centroids with clean n log^2n too: https://www.codechef.com/viewsolution/37512077

It seems that tests were changed during the contest. I dont see WA’s, because on these two tests i have TLE with this solution now.

No, the tests weren’t changed, but I should explain: I ran your solution on the testcases on my laptop, without time limits. When it returned the answer, it was the wrong one.

On the Codechef servers, which do have time limits, it TLEs before it provides an answer, so the Codechef verdict is TLE not WA

But when I submited it during the contest it got OK on this test.

I used Centroid decomptisition with Presistent Trie . We can add one in trie in o(log(n))

I am not sure how the @ssjgz implemented ldfs but how I did it and proved its complexity was that first I solved the question for an array and extended it using minimum height merging which is O(n).What I did in array was similar to what the editorial says.I had to to traverse back and forth.However,I decided that counting the frequency of each bits was helpful and easier.For a certain index i it is easy to see that if fr[i][bit(l)] be the frequency of numbers with active bit(l) and a[i] be the numbers that exist before i then it follows that fr[i][bit(l)]=a[i-(2^l)]-fre[i-(2^l)][l].
Coincidentally CHGORAM2 is the exact question that gave me this idea.How I proved its complexity is simple.Let B be the size of bitset we have,so this would be straight away multiplied by the complexity of minimum height merging so it is a nlogn solution.However unlike chgoram2 which uses bottom to top approach this question required to move from top to bottom as well.

can anyone explain how grundy is equal to xor sum of distances of coins .?
How did we got distance here?