I personally feel like ratings are too inflated here on CodeChef up to a certain point and that most people with the same stars differ in skill greatly. For example, I am 5* here on CodeChef (closer to 6* than 4*), yet I fluctuate between 1650 and 1800 on CodeForces. On the other hand @sharath1999 is also a 5* coder, but more of a 2000-2100 on CodeForces. See the difference in rating? There are many 6* people who are 2300 on CodeForces, but also 6* people who are 1700 (this is also without cheating). In my opinion there needs to be a rework of rating system, but not as in add stars, change stars, etc. but make it more difficult to gain rating. Don’t let every 1700 participant who gets rank 500 in Div2 get 130 points. What is the point of rating system and stars if we get 100 points per average performance? I was among the bottom 50% of 200 people yet I got rating. Is this a joke? On CodeForces you can’t maintain master being 600th of 1300 Div1 participants, yet here I am 110th/200 people and gain 50 points. WTH???

I like CodeChef as a platform, the problem quality is okay, it’s all in all a decent place, but stars really aren’t a measurement of our skills now even for the honest participants in Div1.

hey hey hey. we already have the plag problem. Rating system may suck but let them punish cheaters first. Then I will support your whine. cheers

Solving problems to gain stars requires many different skills, for example solving problems, knowledge of number theory, algorithms, and in some contests the ability to work fast. Different people have a different mixture of these skills, and various competition sites require a different combination too, so I do not find it surprising that people’s relative rating varies between sites.

I don’t think your logic is correct. Since the rework of CodeChef’s problemsetting team, most people who propose problems do it on both platforms (specifically talking about Div2 and Div1 short). Both platforms focus on DP, ad-hoc, math, binary search, sorting and use of basic data structures/segment tree at most for the first 2-3 problems in most cases in Div1. What’s more, I’ve seen so many similar problems (which are labeled “easy-medium” or “medium” which translates to 2000-2500 difficulty on CodeForces) and guess what - they seem to be standard and appear on every judge. The only difference I could see is partial scores here on CodeChef, but not all contests have partial scores, so I don’t see why that would be the determining factor.

For example take any Div1 Cook-off as an example. Most participants solve the first problem, while only about \frac{1}{4} or \frac{1}{3} of them fail to solve the second problem. This sometimes varies as second problem is very difficult, but it’s mostly like this. What doesn’t change is the fact that third problem is almost always solved by a relatively small number of participants 20-30%.

Now let’s take a look at a CodeForces Div1 contest, which attracts 5-10 times as many users. The numbers don’t change. The first problem is relatively easy for the participants, the second problem already gets slightly harder, and the third problem is solved by 20% of participants (25-30% on a good day). So I think you see the pattern.

Both the platforms use almost the same rating system.
BUT ON CODEFORCES YOUR POINTS SCORED PER CONTEST MATTERS WHERE IN CODECHEF NUMBER OF PROBLEMS SOLVED.

NOW BOTH ARE DIFFERENT AS POINTS PER PROBLEM DECREASES AS TIME GOES BY IN CODEFORCES. SO TWO PARTICIPANTS SOLVING SAME SET OF PROBLEMS MAY HAVE HUGE DIFFERENCE IN POINTS GIVEN THE TIME THEY TOOK.

SO THERE YOU GO

No, points per problem + time penalty is calculated on CodeChef which is perhaps even more rigorous than the CodeForces system. This means that every problem has an even difficulty regardless of its difficulty which should make more participants who fail to solve second problem but solve the third one lose their rating. It sounds unfair, but when each problem is weighed equally and your performance is only dependent on the time taken to solve it, the harder problem usually takes more time (there are exceptions of course). Your reasoning is contradictory to this fact.

not so fast mate. Codeforces rating system is good, since they have varying ratings for problems of varying difficulty and hence people solving harder problems are awarded. Suppose problem B is easy, but ad-hoc and for some god foresaken reason i am not able to find certain bug in my reasoning.

Does that make me a bad programmer if i am not able to solve it during the contest. Not at all. Assuming u got stuck on some problem you try another. If you got stuck in simple one , good for you solve harder one and get more points (AFTER ALL POINTS ARE CONTINOUSLY DECREASING FOR ALL PROBLEMS). if you got stuck at more harder problems. well suits your rating and it depicts almost correct level you are at in competitive coding.

IN CODECHEF IF YOU COULD SOLVE EASIER PROBLEMS FASTER AND NOT HARDER ONES YOU STILL HAVE A CHANCE AT BETTER RATING. What about the guy who got stuck at easy problem due to some oversight, bug, but could solve later harder problems

player A would be ranked 1st in codechef (he took less time to solve easy problems)
Player B would be ranked lower(As there is no appreciation of solving harder problem, same points)

so there you go. Now I WOULD LIKE TO ADD AFTER GOING THROUGH ALL THE DISCUSSIONS PREVIOUSLY I HAVE DECIDED NOT TO PARTICIPATE IN THE THREAD ANYMORE AS IT’S NO LONGER RELEVANT TO THE TOPIC

ALSO ADMIN WOULD NOT LISTEN TO SOME CODER WHINING IN DISCUSS (legends say admin doesn’t surf discuss sections, unless you post some shit to reveal there hippocracy)

NOW BOTH ARE DIFFERENT AS POINTS PER PROBLEM DECREASES AS TIME GOES BY IN CODEFORCES. SO TWO PARTICIPANTS SOLVING SAME SET OF PROBLEMS MAY HAVE HUGE DIFFERENCE IN POINTS GIVEN THE TIME THEY TOOK.

Your second post has nothing to do with this statement and literally bashes me for replying to your words. “Same set of problem” meaning problems P_1 and P_2. If you solve these two problems quicker on CodeForces your rank is higher than that of somebody who solved them slower, but guess what - the same is true on CodeChef as well.

This is what I said about solving different problems, and you literally said the same thing in your response:

It sounds unfair, but when each problem is weighed equally and your performance is only dependent on the time taken to solve it, the harder problem usually takes more time (there are exceptions of course).

What I mean by this is clear. Somebody solves A and B, you solve B and C - chances are your rank will be lower. This all goes to say that gaining rating should be much more difficult on CodeChef, but on the contrary it’s easy af. Out of all the people with 2 problems 80% of them will solve the same exact problems and their rank will only depend on the time taken to solve, which is similar on CodeForces. Solving A, B, C, and D is more rewarding than solving A, B, C, and E on CodeForces, provided E takes you 80 minutes and D takes you 20 minutes. It’s the way system is designed to work, so your point is clear, but has literally nothing to do with “easy point gain” on CodeChef.

I’ve always felt codechef ratings are kinda inflated or even wierd to that matter. For example in the beginning of 2020, I was almost 5 star on codechef and at the same time a newbie on codeforces. Fastforward to present I’ve increased by almost 1000 points on cf and only 200 on codechef lol. 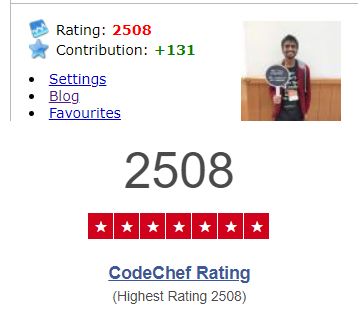 At least I have the same rating on both platforms.