Can someone show how to solve Sticky Notes from December Long Challenge
Link to problem : https://www.codechef.com/DEC19B/problems/STICNOT

The solution is independent of the graph
Sort the edge weights and the node values in descending order.
The heaviest edge has to be assigned to 2 nodes (i.e. 2 nodes should have value greater than the heaviest edge) and after that the remaining edges can be assigned to 1 node. See how many node values you have to upgrade and that will be the answer

This is very easy problem, easier than three other most solved problems in div 1.
As problem statement says u can swap edges and vertices. That means you can change tree in whatever form. That means tree structure doesn’t even matter here.

Thus insert N-1 values in N values such that above condition meets.
The idea is to sort both N-1 edge values and N vertices values. Now try inserting first N-1 values starting from max side. If two vlaues in vertices array exists then insert else add a new value because there is no other way to insert this edge value. This way keep inserting all the edges.
For example E: 3 9 and V: 1 4 9, so u can’t insert 9 in 4 and 9 so add a value higher or equal to 9. So 9 is done. Since each vertex can further be used to connect with other vertex using new edge, we can use 4 and 9 to insert 3.
This way you added only one new value. Same approach can be extended to insert any such input.

This is very easy problem, easier than three other most solved problems in div 1.
As problem statement says u can swap edges and vertices. That means you can change tree in whatever form. That means tree structure doesn’t even matter here. 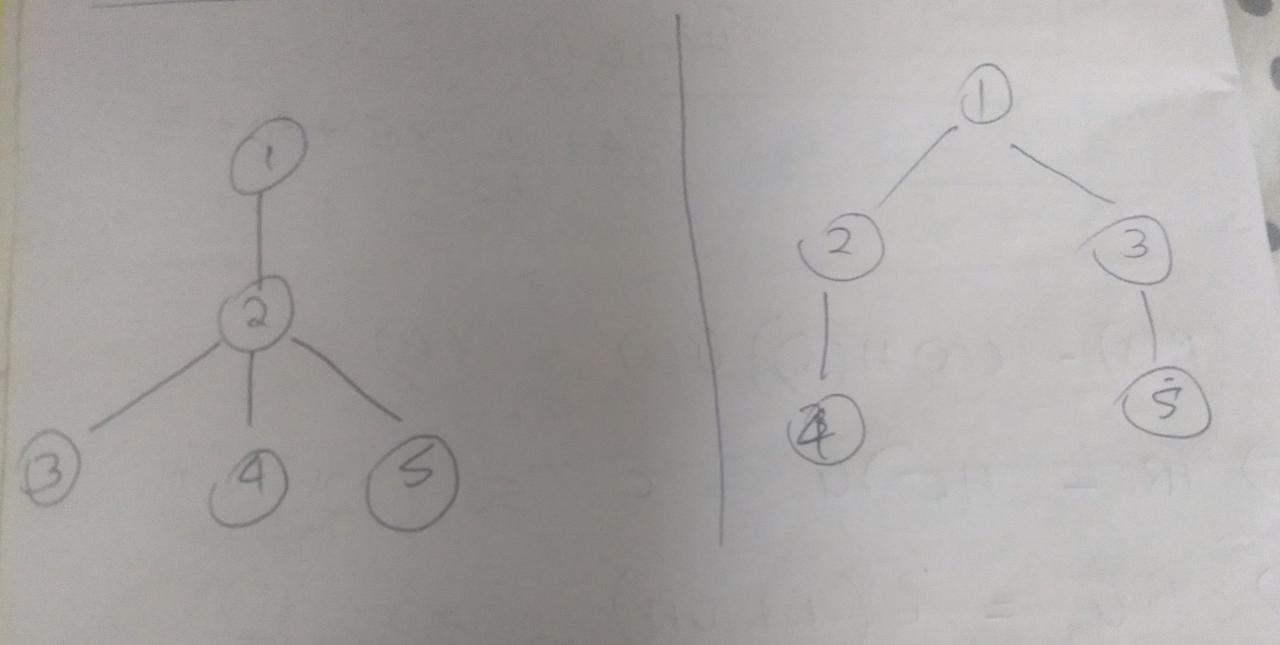 What I did was sort the edge weights and node weights in non - decreasing order. Then I traversed through the edges and for each, I searched for the first matching node (the one that obeys the given constraints) using binary search. If we don’t find a match, we pay one coin and change the weight of a vertex (so that it now equals the next edge weight in sequence and the condition is just satisfied). If we find a match, however, we delete the node so that we don’t match it with any other edge in the future. Continuing this way, we have formed exactly n - 1 matchings in the end, with the invariant that one vertex is being matched and deleted in every iteration. The remaining vertex is tested with the last edge weight and if it already follows the condition, no more coin is paid and if it doesn’t, one more coin is paid and we change its value to that of the last edge. Now join each matching together to form a tree (it is always possible as we have paid to achieve the same) and viola, you’re done

Is this a norm when it comes to competitive programming because I feel that it isn’t very self explanatory. I feel like this should’ve been mentioned more explicitly in the question. Thanks for the help though @manoharsingh23. I’ll try to think of the solution once before coming back here

Sort the edges and the nodes in non-decreasing order.
Pick the Nodes at which are greater than the Edges from start.

It felt funny after I realised this property. I did solve without knowing this, only assuming that values of edges and vertices can be swapped but the tree structure remains constant. Thanks.

can you help me out for the given example case. like why only one coin is needed ?
thanks in advance… 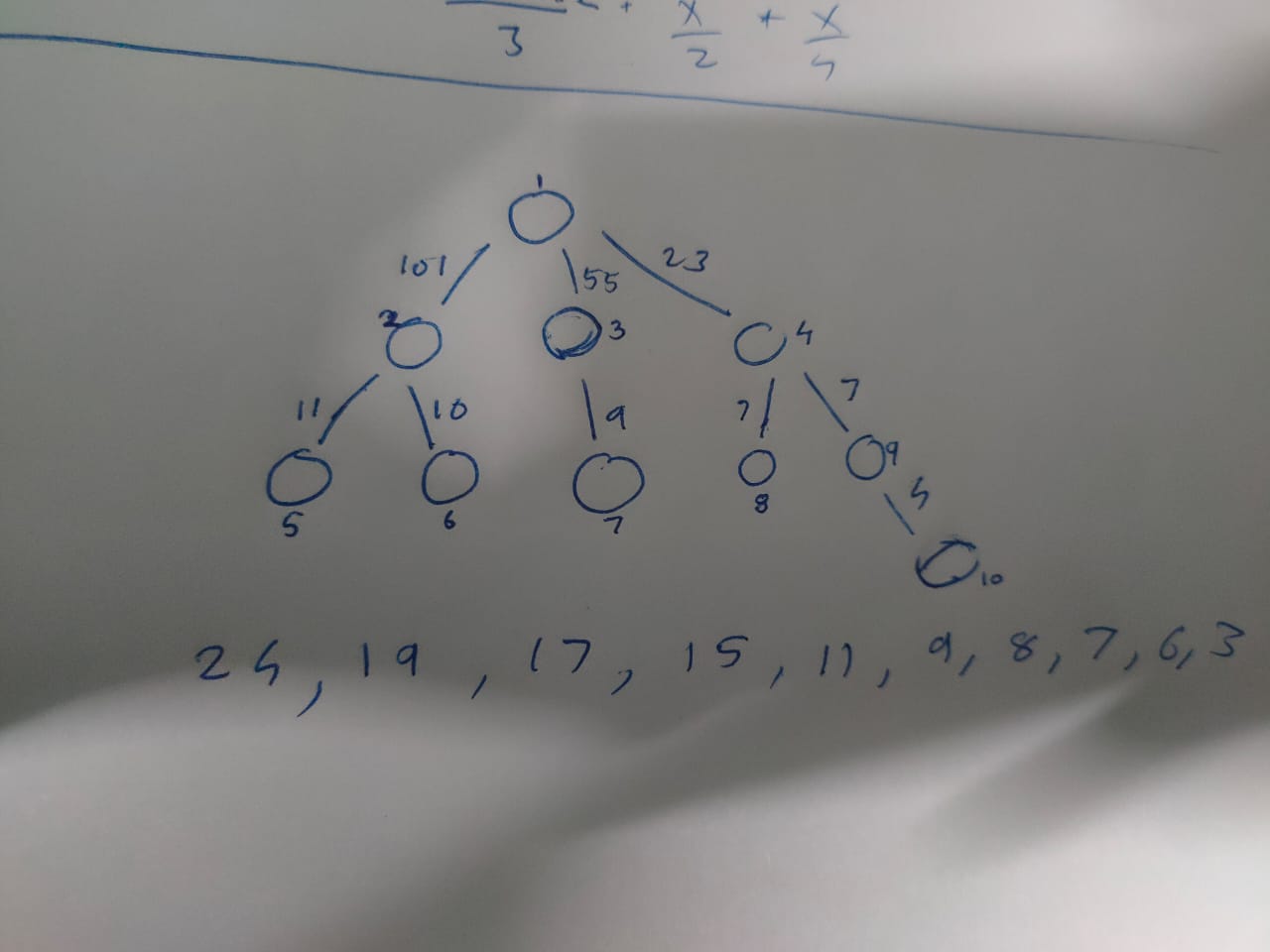 Do the same thing for all vertices. The value of count you get in the end will be the answer. Also this is the tree you get if you follow the above implementation with coins=3. 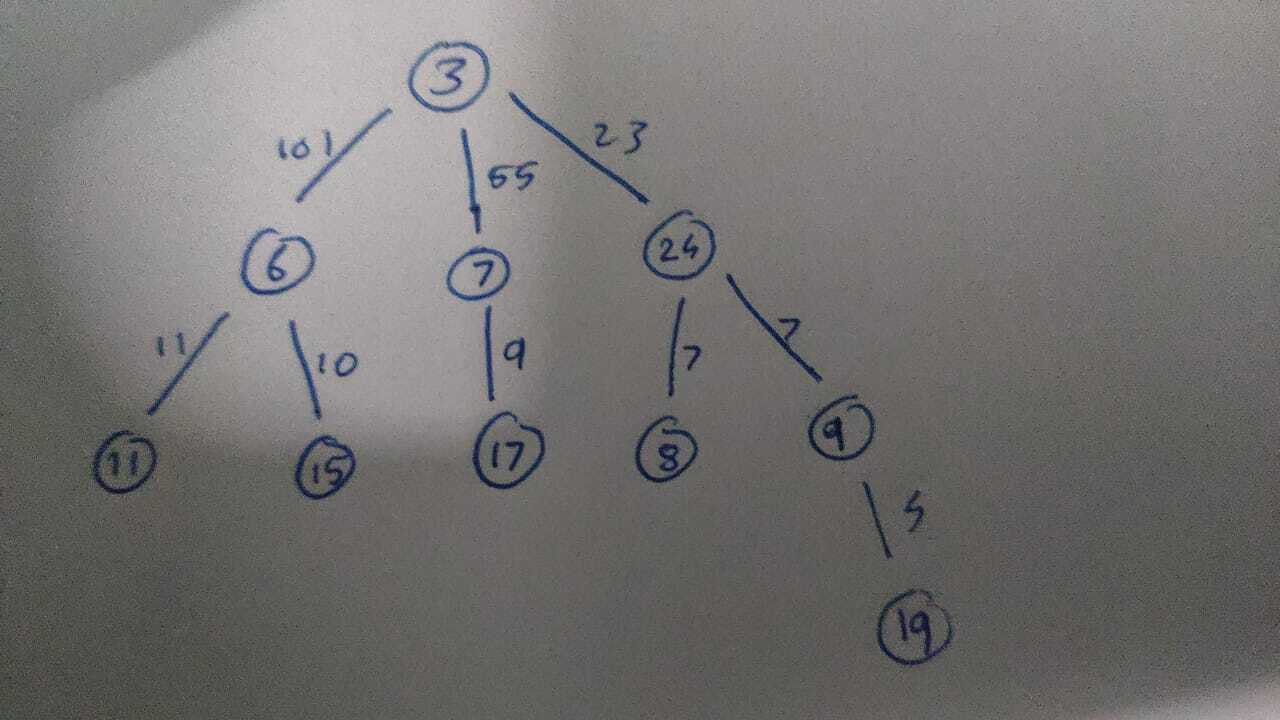 Was able to solve it very easily given the fact that the tree can be whatever structure we want. It’s kinda unfortunate that the problem wasn’t very clear.

@adarsh_007 So for your test case edge with values 4 and 7 needs to be inserted among 1 5 and 10.
You start from higher end for both edges and vertices. So, here we start with 7, to be tried to insert between 5 & 10. 10 is okay but 5 is lesser than 7. Since there won’t be any vertex with higher value than 5 (because they are sorted), we must have to add a new value. For doing it optimally, we should assign it to smallest vertex, because that is useless now. Suppose newly added value is 8. So, new values of vertices in increasing order are 5, 8, 10. Now, we try to insert 7 again, because it was unsuccessful earlier. 8 & 10 is working now for 7 as both the vertices having higher values than 7. Now, try inserting 4. Because 8-10 is already used, try either 5-8 or 5-10, both should be working for 4 as well. Therefore, only added new value is 8 thus number of coins to spend to add any new value is 1.

thank you very much @smile_forever @manoharsingh23 … I misunderstood the problem and the example. Even not read the Inputs carefully. LEARNING FOR ME : I will read the problem statement carefully from next time onwards.

@adarsh_007 Don’t worry mate, rating is nothing BUT learning is everything. And this time you learn by mistake. That’s sound awesome to me.

PS. I’ve made many silly problems too…

Thanks to @smile_forever for this graphical image.