PROBLEM:
You’re given 2 balls A and B on 2-dimensional plane moving with constant velocities A_v and B_v and having radii A_r and B_r. Also there is a wall from which they might bounce off. You have to calculate the area of the largest possible intersection of these two balls over all moments of time.

QUICK EXPLANATION:
Add “virtual” balls moving on us from the other side of the wall, this reduces our problem to finding moment of time when two moving points have smallest distance between each other, after that use every single formula from computational geometry you can recall to solve the problem.

EXPLANATION:
For convenience we will use STL complex numbers as substitute for point class:

Let’s solve the problem step by step, from less horrifying parts to more horrifying ones.

Overlapping area. It’s pretty obvious that we need to know the minimum possible distance between centers of two balls. Let’s learn how to calculate area of intersection, given balls radii r_1 and r_2 and distance between their centers d. First of all in case d>r_1+r_2 then intersection is empty and in case d < |r_1-r_2| smallest ball completely lies inside largest, thus answer in this case is \pi \min(r_1,r_2)^2.

Otherwise situation is as follows: 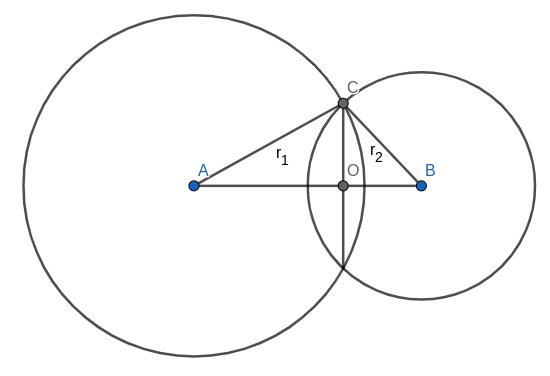 To calculate the area of intersection we have to know AO, we can obtain it from equation:

Area of circular segment. Now our situation is as follows: 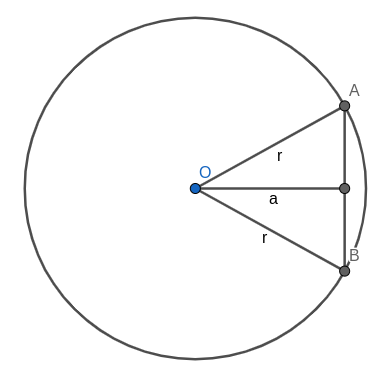 Note that formula holds even if a\leq 0.

Mirrors and reflections. Consider the movement of ball A when it bounces from the wall: 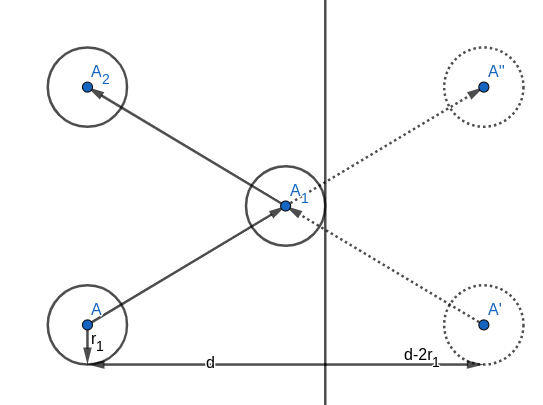 It proves convenient to assume that ball A simply fell behind the wall and continued its movement towards position A'' while at the same time it’s reflection A' ascended from the wall and moved towards A_2 instead of initial ball A. It heavily simplifies problem because it allows us to forget about the wall at all and instead consider four moving balls A,A',B,B'. Closest distance between any ball marked with A or A' and any ball marked with B or B' will provide us with the answer.

Note though that for these intersections you must consider balls which are really presented on our side of the wall. Let A_t be the time to get from A to A_1. Then we deal with ball A on [0,A_t] and with A' on [A_t,+\infty). Note that if A_t < 0 we may say that ball A already bounced from the wall and we actually should consider only movement of ball A.

Now we should carefully replicate the balls and recalculate their velocities. To do this we will consider normal unit vector n to the line L=(W_1,W_2). Distance from A to L has signed length equal to d=(A-W_1) \cdot n and projection of A's velocity on L is V_d = A_v \cdot n. From this we may obtain explicit formulas for A' and A_v':

Also since we know that distance from A_1 to L is A_r, we may say that:

Thus we have following implementation for calculating A, A_v and A_t.

Closest distance between rays. Now for the final part. We have balls A and B flying in 2D space with velocities A_v and B_v correspondingly. We need to calculate closest distance between them in segment of time [t_l,t_r]. Instead of considering both movements we will say that A doesn’t move at all and B moves with velocity B_v-A_v, then our task now is to find distance from A to the ray which goes from B and has direction B_v. 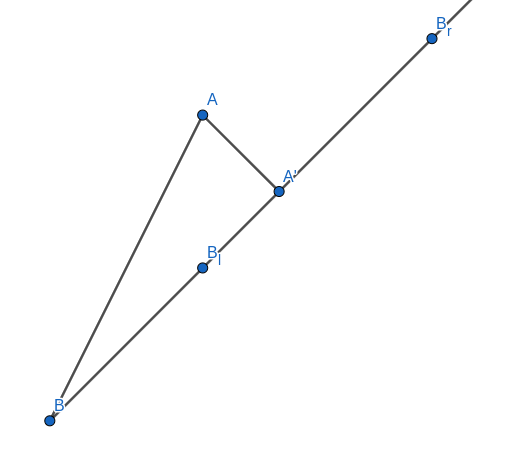 Gluing it all together. After we’ve introduced all auxiliaries, solution looks like this: