Given a permutation p of length n, find a way to sort it using at most \left \lfloor{\frac{n}{2}}\right \rfloor cyclical shifts of length 3.

We have to find a sequence of swaps to sort the permutation. If the permutation is odd, it is not possible to sort it. Let’s process the swaps from the sequence two by two. If the current two swaps are from the same cycle, we can replace them with a single shift, otherwise we can perform two shifts. If we sort the cycles so that the ones of odd length come first, we will never use more than \left \lfloor{\frac{n}{2}}\right \rfloor operations.

\textbf{Observation 1}: A shift(i,j,k) is equivalent to performing two swaps swap(i,j), swap(i,k) in that order (we swap the elements on those indices, rather than the indices themselves).

Let’s find all the cycles of the given permutation. For a cycle of length l (a cycle that contains l indices) we need l-1 swaps to sort it, so we characterize every cycle as a list of cycle size-1 swaps. Note that within a single cycle the first index in every swap is the same, so each cycle is represented by a list of this form:

Using \textit{Observation 1} we can replace two swaps (x,y),(x,z) with a single shift(x,y,z). If a cycle is of odd size, we need an even number of swaps to sort it, so we replace two consecutive swaps (x,y_{2i-1}),(x,y_{2i}) with a single shift(x,y_{2i-1},y_{2i}) for each 1 \leq i \leq \frac{cyclesize-1}{2} . But, if a certain cycle is of even length, then a problem arises. We have to deal with a list of an odd number of swaps, and one will be left after we process the first cyclesize-2 swaps. The following observation comes in handy when dealing with that swap.

Here is a sketch for better understanding: 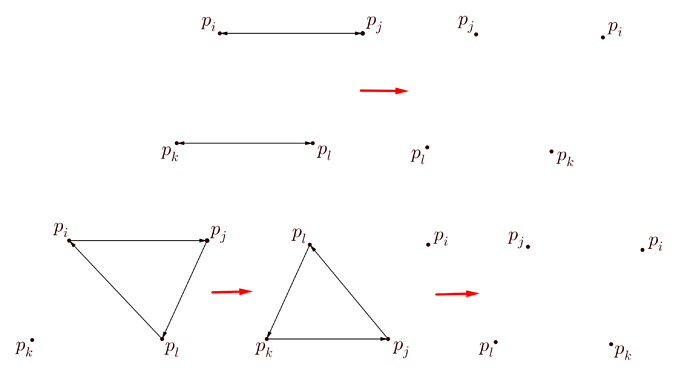 However, this solution is not sufficient. There are permutations for which this solution exceeds the limit for number of operations significantly. There is an interesting proof on the upper bound of the operations it uses.

Representing the permutation as a product of transpositions quickly (i.e. extracting all the swaps that need to be made) may be the first somewhat troubling part in case you have never done it before. It is usually being implemented in the following way:

In order to be able to sort the cycles according the parity of their length, we need to create a separate list for each cycle and store each transposition in the list of the cycle it belongs to. We can achieve that by modifying the code above:

Now it only remains to construct the solution by traversing the transpositions and grouping them two by two as described, in the order they are given in the ListOfListsOfTranspositions.

Problems in permutation groups and their solutions have applications in fields like bioinformatics, for example, sorting of genomic sequences. Some more applications have been pointed out in this article, which I encourage you to take a look at.

@admin It would add more value to the Editorial as well as beginner if a Short Video description(Hope that won't take much time) can be provided for each Problems as it helps in more understanding of the problem and concepts.
Thanks.

And if you can’t make it, it’ll be uploaded to youtube after the stream is over.

I tried but the last 2 cases always showed WA. Can anyone tell me what went wrong?
submission - https://www.codechef.com/viewsolution/32830895

i just did those operation first in which we can get two elements into its correct place and then traversed again for leftover to do operation to get an element into its correct position but this editorial is great!
https://www.codechef.com/viewsolution/32962801

@admin Sure I will But It sometimes becomes quite long discussion there as that will be platform for all the DOUBT CLEARANCE ,But what I was suggesting to provide a Short Video Description(maybe around 5-10 min) explaining the core idea of problem In Post discussion what I observed is , in

ZOOM discussion makes it quite lengthy

and so many doubts handling go along the Explanation.

A proper well explained short Video will add more information to the Editorial and new Coders.

Hi guys, I have done this question using Graph. If anyone wants to see the implementation then please have a look at this.

can you please explain your approach.

I was able to solve only first two problems…Can anyone suggest which problems to practice to get better?

Hi Anurag, Here is my algorithm using graph. There are 3-types of operations as follows:

Using the concept of these operations i have written the code.

completely agreed with you

https://www.codechef.com/viewsolution/32623512
here is my solution …
i was just trying to put i at its correct place, nothing much

@losmi247 could you explain this with an example pls

i dont understand this
> If the permutation is odd, it is not possible to sort it.
Can anyone pls explain.

Guys you can refer to my solution here. Its pretty simple to understand.

Its got to do with the fact that even + even is always even. The operation we are allowed to do acts as an even number. If the original permutation is odd, then we can never reach the identity permutation(think of this like 0, which is even).

Before your actual code starts i.e. on the unmodified input array, just once do a cyclic shift on all the triplets that you can obtain directly viz. i, j=a[i] and k=a[a[i]]. Don’t forget to count it.

Can somebody please have a look at my code and tell me where I went wrong??
Please it would help a lot!!
https://www.codechef.com/viewsolution/32923428