I want to know if google has done plagiarism checking for google kickstart round C because submissions of this_guy are really suspicious. If you would see, he submitted all his programs in around last 30 min…no sane person would do that. In his second submission for Countdown problem, has used variable testcases and this was a WA and his next submission has var t which was AC …his entire code is changed in 2 minutes. Why would a person change the name of variables if his code is a WA? You would notice strange things about all his submissions. In his Candies Submissions…check the image- 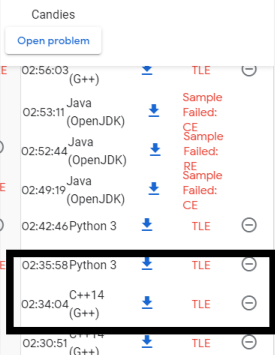 He submitted c++ code at 2:34:04 and a python3 code at 2:35:58 . Either he is so fast that he just prepared a python3 program in less than 2 minutes or he already knew c++ would give tle…so he had prepared the python3 code in advance (just in case c++ doesn’t work).
It is surely plagiarism.
Should I report this to google?
P.S. He cheated in May long Challenge div2 as well.

1 Like
Does Google even check Plag for Kickstart Rounds